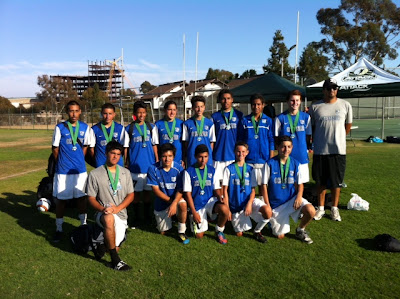 This past weekend, Breakers Black u16 boys advanced to the finals in the Attack Summer Classic. We beat Notts Forest 3-1 and beat FC Heat 4-0. We lost to Rancho Sante Fe Attack in the finals 2-0, and they are ranked 65th in the Nation and 8th in California South. Eddie Franco and Jose Gonzales led the team with two goals a piece, and Angel Gonzales, Danny Medina, and Jesse Martinez led the defense against some really good competition. The boys gave excellent effort and represented Oceanside Breakers in a very positive way on and off the field. Not a bad start to a very promising season and first tournament of the year!